Ive neglected my blog recently however given my circumstances I'm hoping I can be forgiven :) New job, two small children and now  a new anterior cruciate ligament...(as you do)are to blame, however given the fact I cant place any weight on my knee for the next two weeks, then only partial for 4-6 weeks Ive plenty of time to work on some armies army stuff with a little more organisation behind it!

With that in mind, I am moving on with my grand scheme. That is using the British troops as dollies and creating some new forces using them as a base. That basically means stripping my greens of weapons, heads, armor and webbing, leaving just the basic pose ,feet and hands.

These are in the process of being mastered (this week ) with several head options. Ive had my sculptor the very clever Martin Baker create several heads for me, so rather then building one line of infantry at a time, Ill have the heads to build quite a few. Well the infantry anyhow! Additions come later.  These forces include : From Top left to bottom right 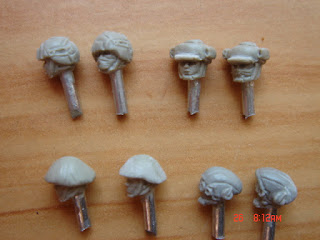 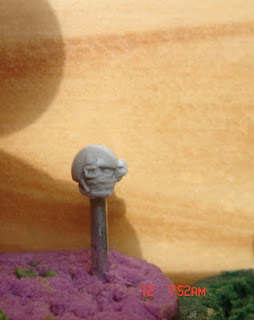 The USA
The airframe design allows for multiple additions, for scopes, cameras, sensors and additional armor as per requirements.

The sub Asian Forces
The Patka inspired helmet was designed for Sikh forces. It also conveniently is an excellent helmet and is being used by several sub continent forces . For the sci fi edge, it has its additional camera and sensors and will likely have an optional half visor/HUD

These are very old school German DDR inspired. They will however have an array of sensors and cams incorporated under the large rims.  The rest will be a simple rusk head conversion, with some additional keffijeh's around shoulders.  Ill also add some goggles. Ill also have different HQ and the odd additional figure. I will also have some new heavy weapons. A recoiless rifle, mortars, HMG and ATGM teams


Sino / PLA forces. Bottom right
As per my PLA concept artwork Ive designed a helmet and Martin has sculpted something that matches very well.

As Ive already began work on these as per below, however Ive now the heads. I'm going to refine the shoulder armor, however they are pretty close to how I want them 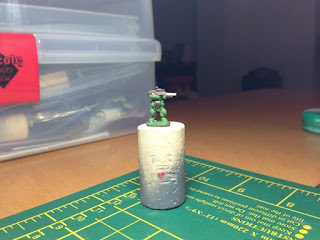 and thats about it for now! More to follow as soon as I have my concentration back. Im still a little weak and hazy from Friday Op, however getting back to senses fairly steadily :)

Ive some information on vehicles and Ill post an update later :)