No Stars in Sight AAR - Game 1


Just a quick AAR of my first campaign game.


Russian Empire Forces and Rusk forces have been flexing their muscles over the past few months with the odd exchange of space border violations.


Setting
Planet  Alexeyevsk / Svobodny (depending on which side) of the Gukovsky System.

The Gukovsky system is a buffer zone between both forces containing 3 habitual planets.  Alexeyesvk has several privately funded colonies with a growing economy based its farming exports. The colonies fund a communal militia, mostly using RUSK exported arms.  Stories persist of RUSK 'observers' helping with training. A wet tropical planet by Earth's standards, however large mineral and Helium 3 deposits have made recently discovered.

Across the colonies unconfirmed incursions by both sides and a common breakdown of the communal agreements have led to requests for support to either nation.

Expeditionary forces have been sent to investigate and 'assist'

The table was set-up with large amounts of cover several arable rice fields and the storage facility. 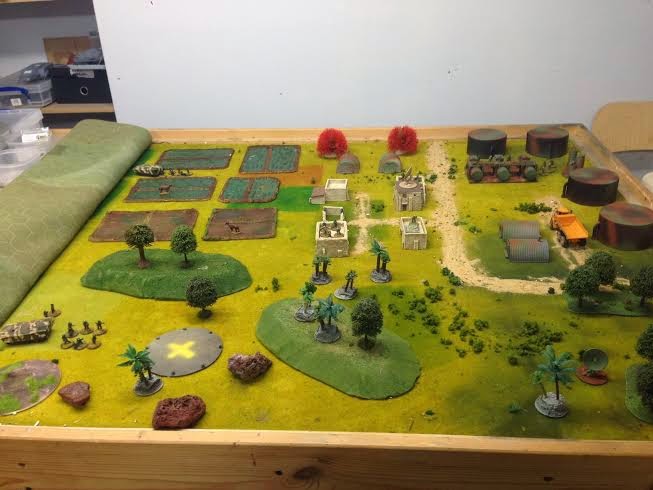 The whites deployed to the west of town in two locations. The Militia forces remained hidden in the workforce buildings and plant. 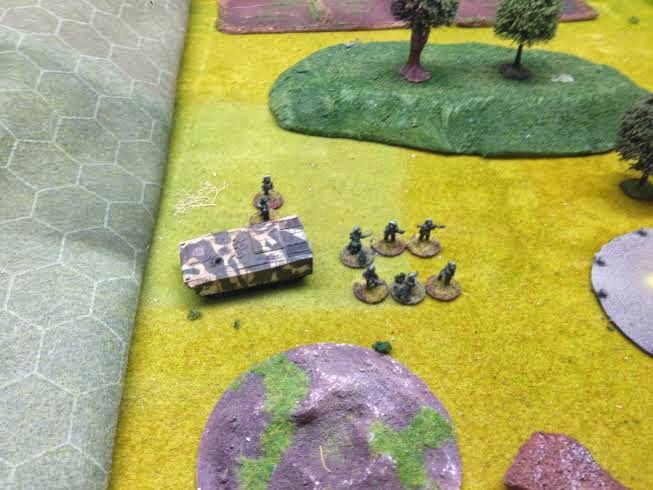 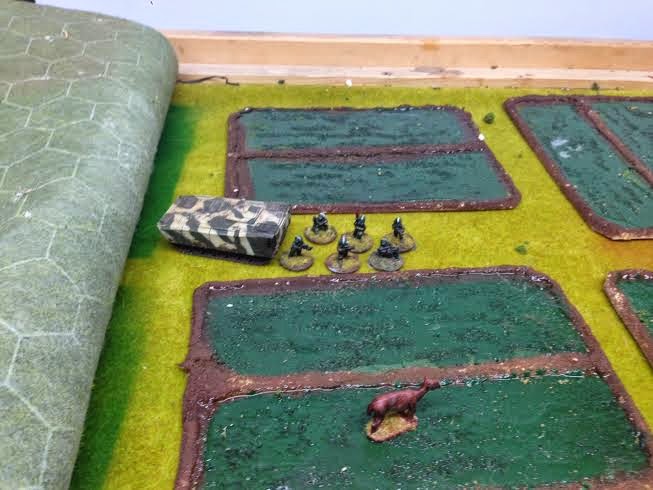 The next turns provided uninterrupted movement of the white forces infantry teams as the APC's remained on overwatch. 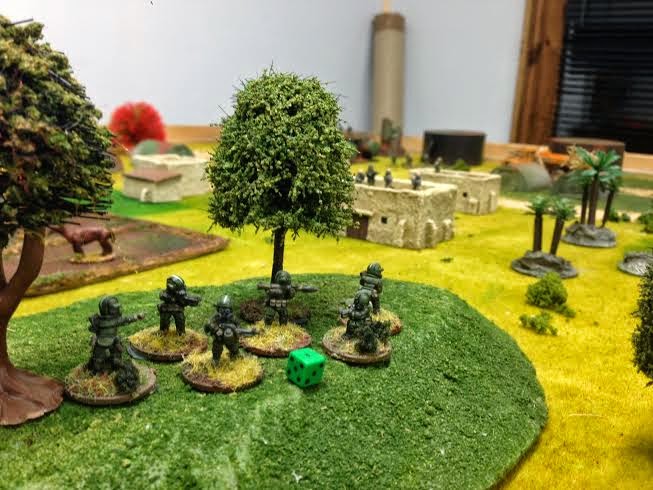 Team B carefully negotiated some hilly and forested grown successfully, despite a militia force opening up.

Team A were less lucky and the first professional soldier fell as the squad moved through the rice fields. 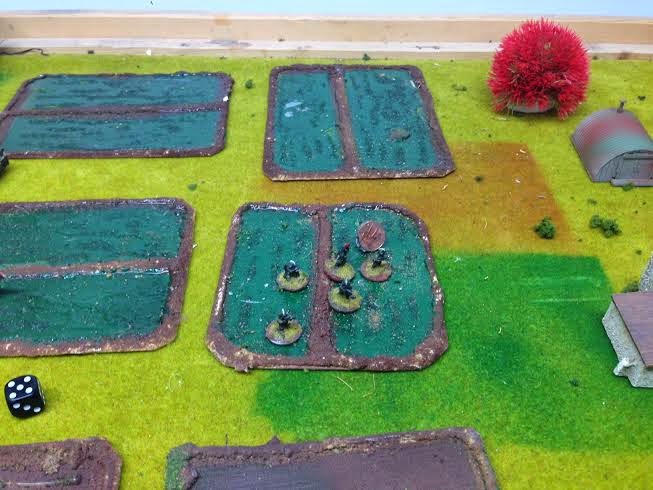 On the opening rounds of fire, it was now time for the Russian Leaders to inspire their man,which they duly did. 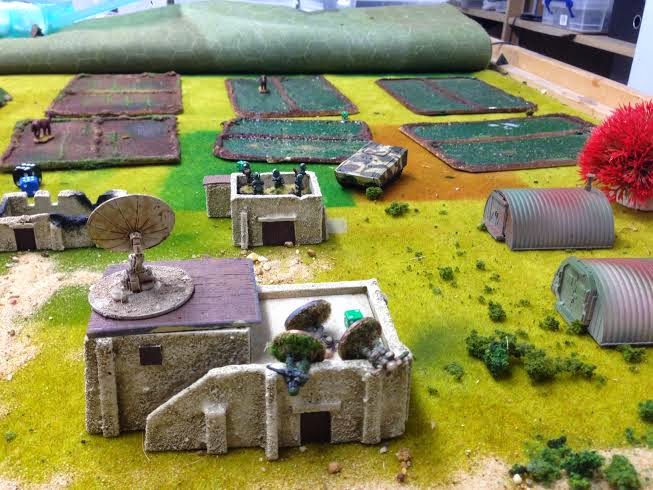 TeamA and B both opened fire  and caused casulaties and more importantly pinned both targets. Supported by suppression fire from the APC's the two teams advanced into some building cover, forcing the pinned troops to withdraw. 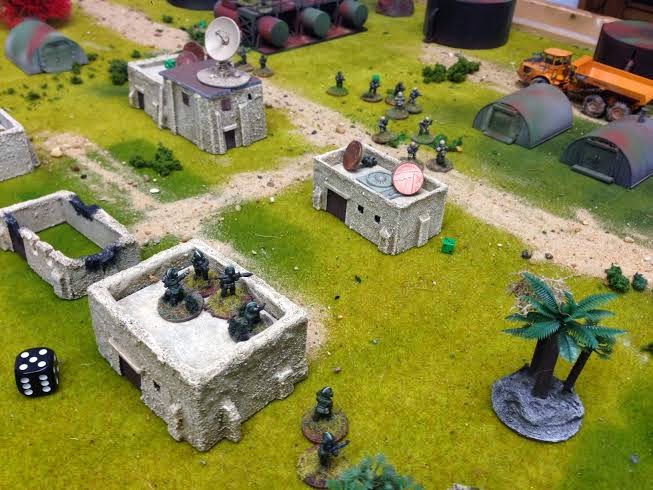 The fighting had quickly turned with the Whites supported infantry attacks, however one surprise was about to jump out in the form of a local commander. On his activation he managed order a RPG gunner to jump out and take a shot at the APC....resulting in big Kabooooommmmmm. 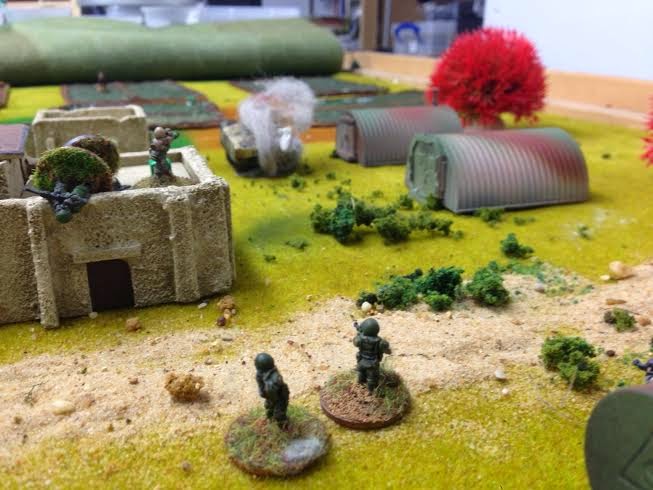 This however was not followed up as two Milita squads failed to get into position and the continued fall-back of the others. 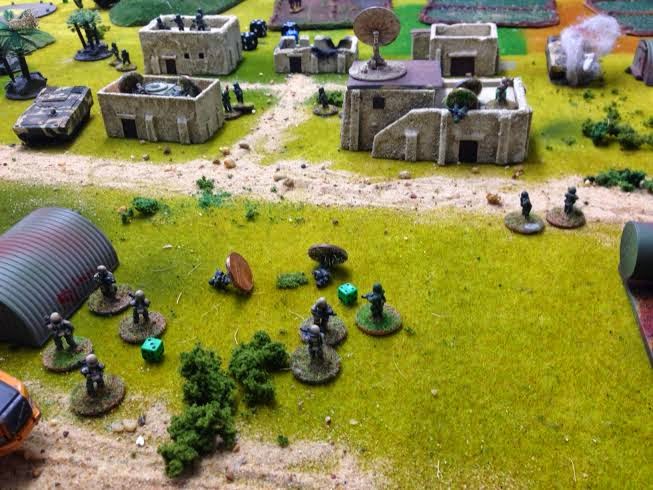 With a lack of cover and troops the Militia forces decided that to fight another day was a wise move and slowly removed them selves from the board.

The White forces took two causalities, one from each team and lost an APC, however took all objectives. The Militia took 4 casualties and had a number taken prisoner. An outstanding success for the white forces and they now have a base of operations for the region.

Overall a very interesting and fun game. Despite not being 100% familiar with the rules the game took around and hour and a half. This included numerous trips to top up my drink and a conversation with the Rules developer to clarify them part through. Now, this isnt part of the normal service from Ivan :) however pretty dammed impressive to get a reply that quickly!

The information also proved I had got the workings wrong, despite very clear rules! Id simply needed verification as to the turn sequence in that in each 'turn' you could pick 'ANY' leader to activate again.

Overall Id say they are a really great set of rules and I'm now quite confident to try add more elements.  I really liked the fact you needed to think strategically as opposed to line them up and fire approach.  Poor tactics = very quick battle as your dead!

Ill be using them for a while for sure !


Hope you find this interesting and Ill have more AAR's soon :)

Email ThisBlogThis!Share to TwitterShare to FacebookShare to Pinterest
Labels: No Stars In Sight