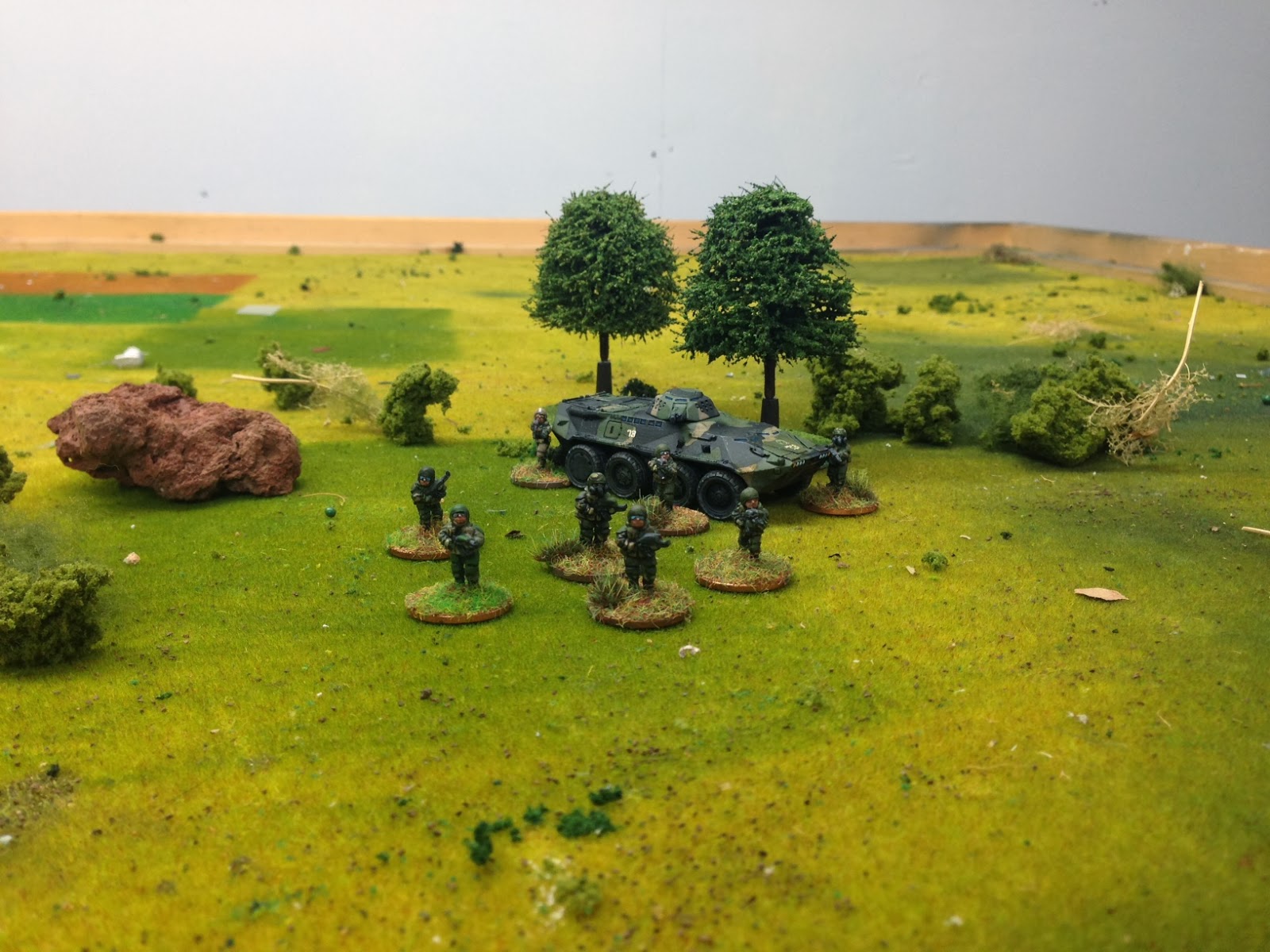 Turn 1
The British Commonwealth forces had the initiative for the first turn and proceeded on foot to move to the objective town.
Rusk forces landed and deployed. 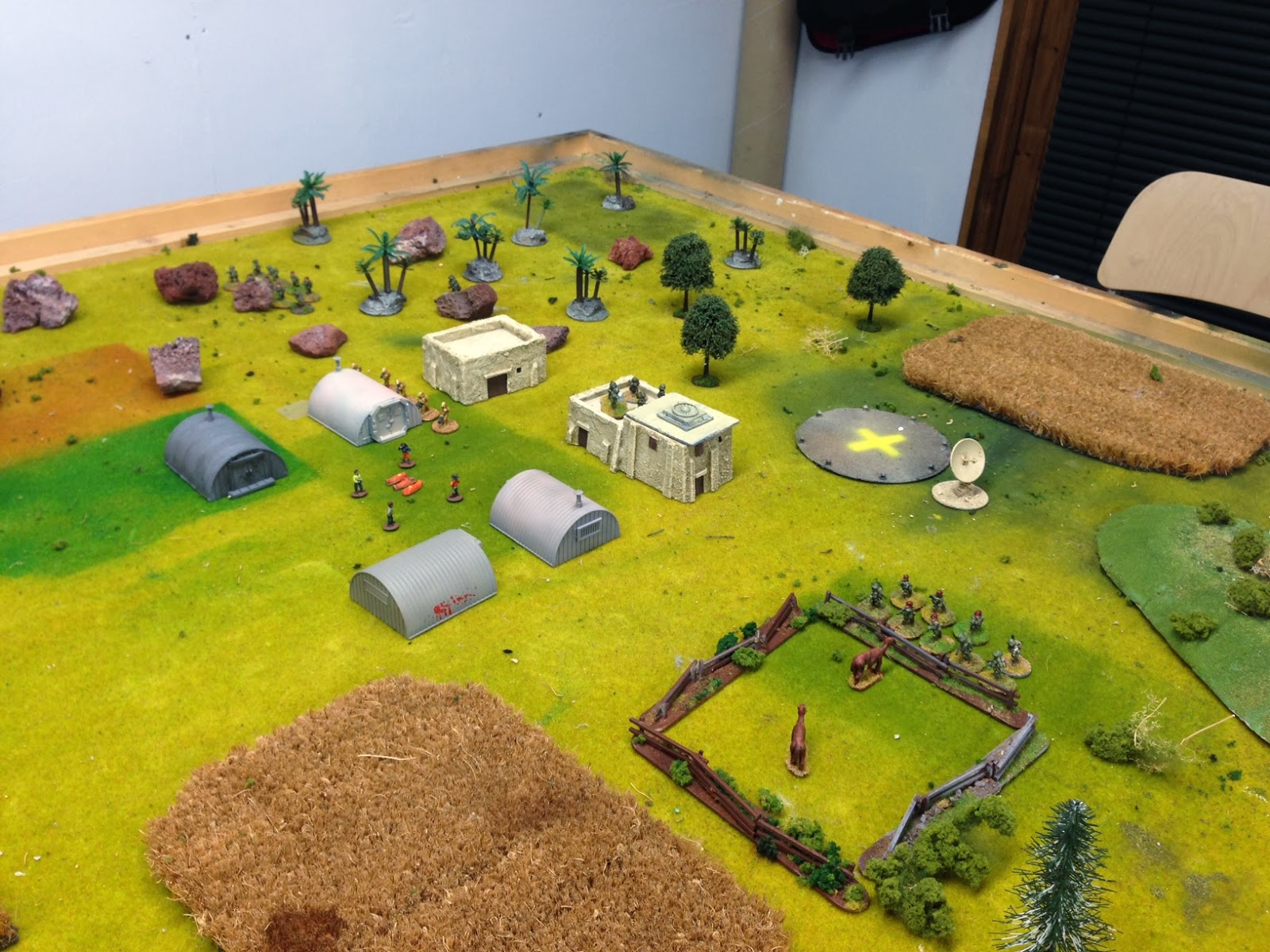 Turn 3
BC Heavy infantry took cover behind buildings and attempted to take sample . (This involved one figure rolling D6. Needed a 6 to take sample. Each turn +1 to succeed.)
Other squads positioned
Rusk BTR290 deployed and fires at HQ. Several hits. Amazingly all hits return to action with minor or no wounds. Thanks to medic!

BC FO team fire salvo at BTR. The BTR CRAM defend the APC and nearby troops successfully.
Rusk forces win reaction and open fire. Several BC are felled in return for little damage.
Rusks advance (A great start! )
………BC forces pass several wounds checks and return to action….(Next initiative and reaction is critical!)

BC win initiative….(bah!)
Several forces open Fire. Immediate rusk casualties. One entire squad down to a man, thanks to Heavy Infantry and Infantry combined fire. Causalities are not checked due to no nearby troops or medics. 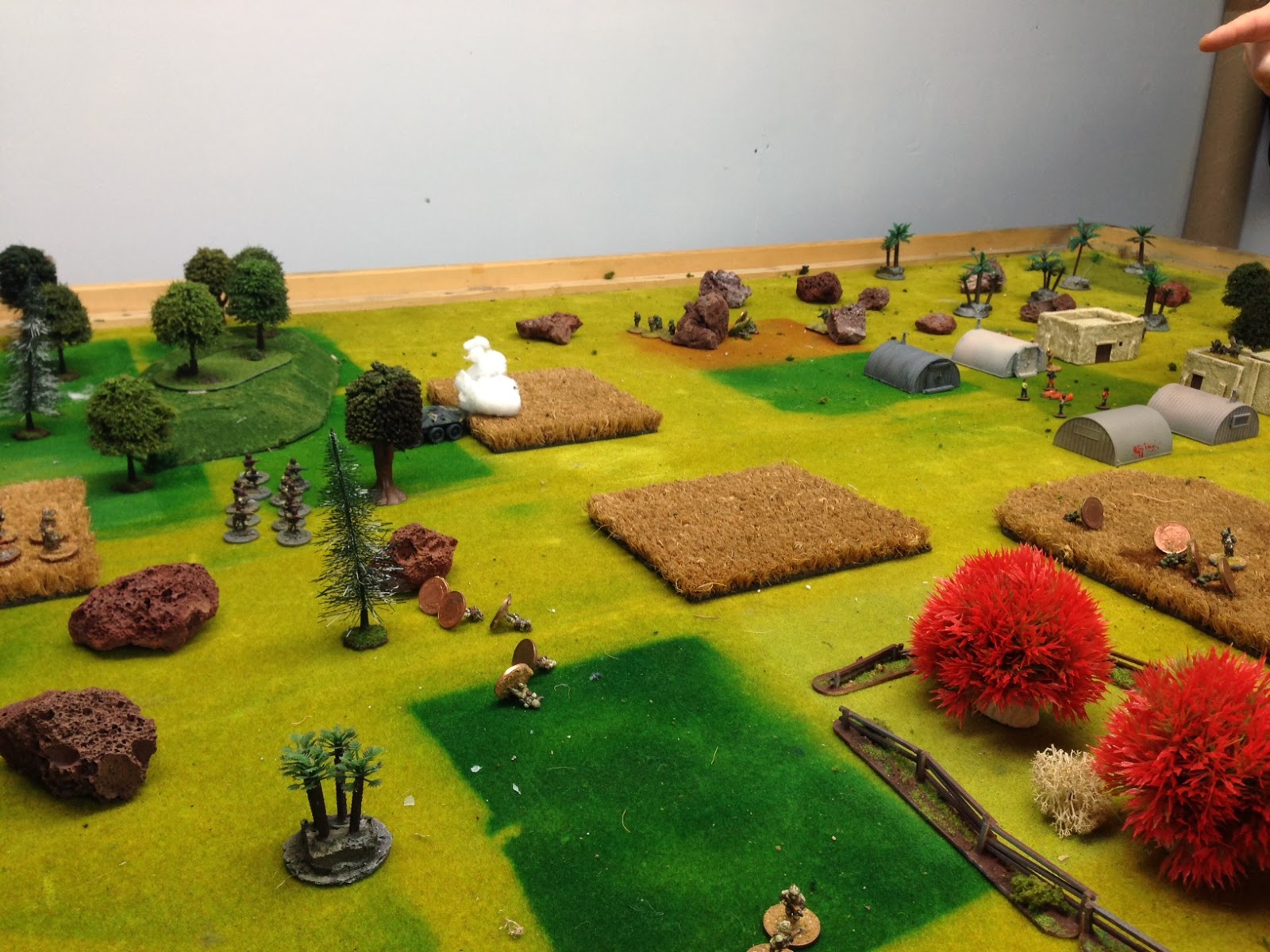 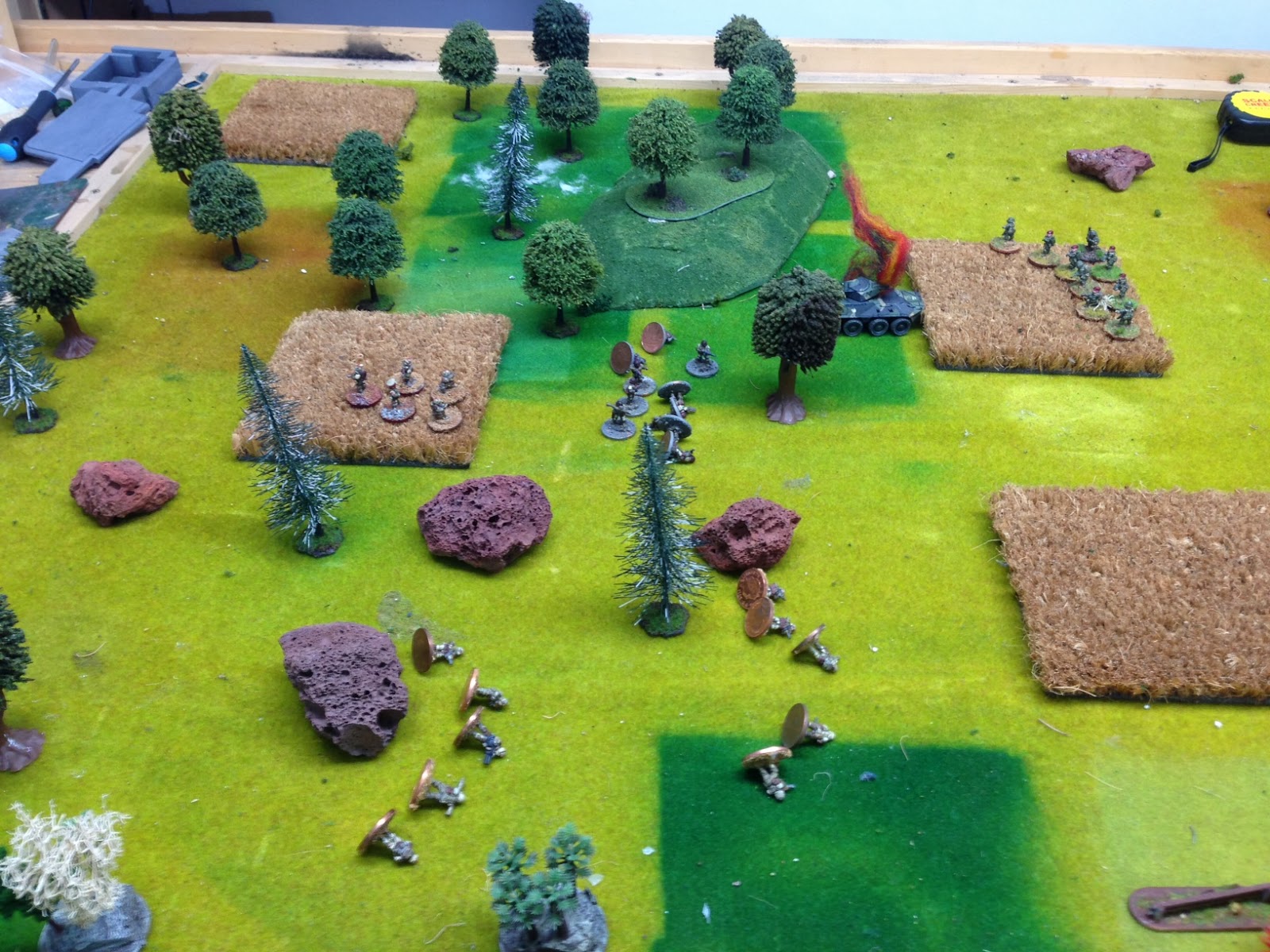 Turns 7 to 9
BC forces leave the field taking sample
Rusk Infantry forces direct fire against BC heavy infantry. All are hit on varying turns, however all recover using the internal medic resources the suits provide. Slowly however they start to loose numbers
Turn 10
All BC forces have left the board and the last remaining heavy infantry trooper is taken down. Rolling a 1 meaning he is dead. Several Rusk infantry have also been removed, however the Rusk Forces were firing with a full 10D per round of fire and the BC forces were in the open. 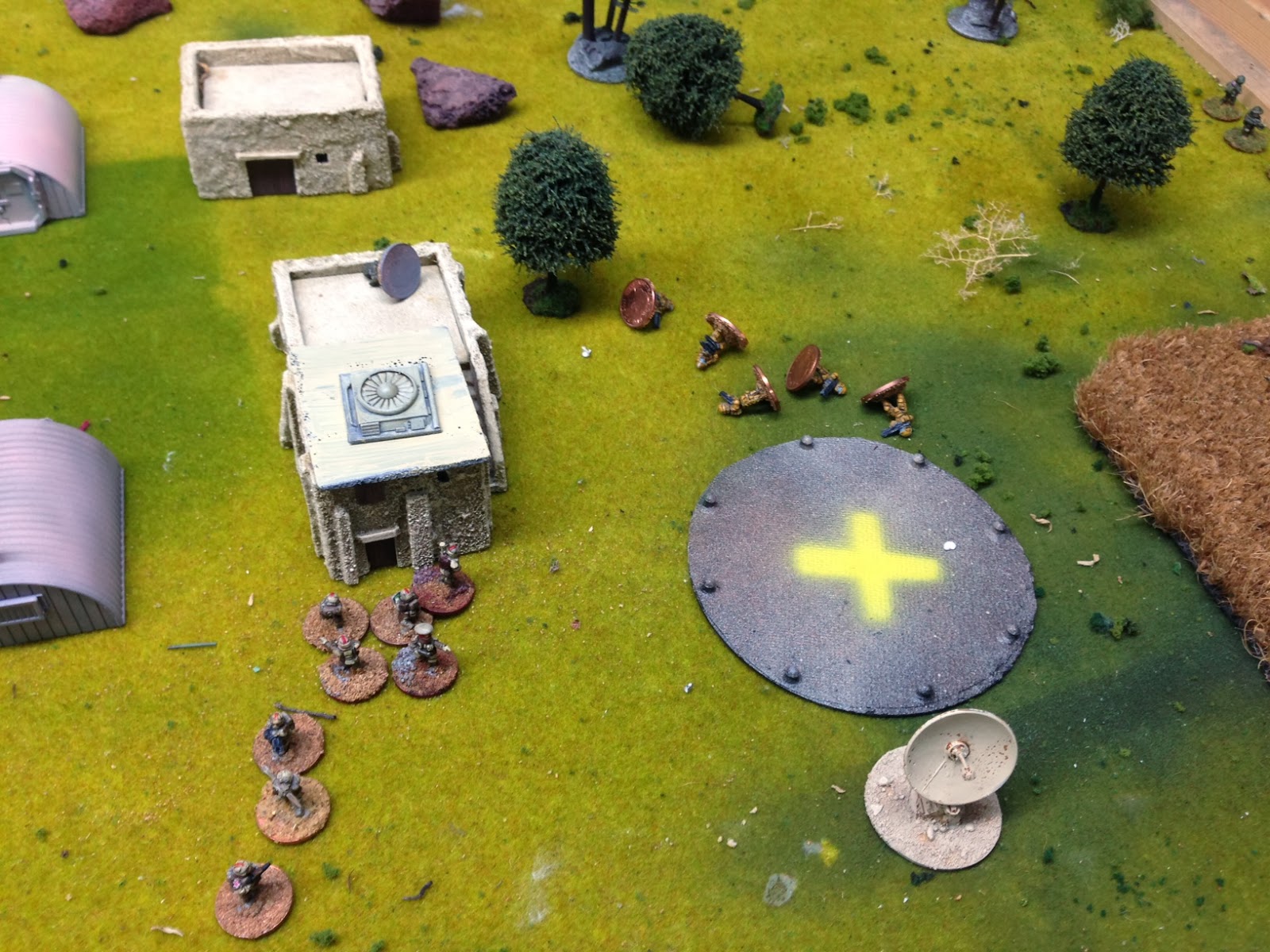 Several ranking comrades have been ‘removed’ ……
Operation сокол a failure. The sample was recovered by the BC forces.
The 3rd Shock Army Guards took 60% casualties and lost its BTR support.
British Commonwealth forces had minor casualties of its infantry squads. Heavy Infantry wiped out to a man
BC medical support proved to be the major difference plus the defensive and offensive power of the heavy infantry.
The Rusk infantry on mass proved a much more reliable solution. A full 10D firepower helped put down the Heavy Infantry troops. The problem was keeping them down, however bit by bit the Rusks whittled away the Heavies. A tactic I should have used at the start. That and the APC would have been nasty. As it was, the Rusk  fire and manoeuvre worked well against like for like troops, just not against heavies whom pulverised them! Different tactics for fighting between quality D6, D8 and D10 troops is the answer!
My contestant Mike from BlackHat used his forces well. Using the D10 troops as the vanguard and the infantry on support. The APC was taken out quite cheaply sadly for me, despite state of the art equipment! The BC AT weapon and the Fusion Gun on the Heavy Weapons packed quite a punch, even against the front armour of the BTR 270.
All in all a good outing for my troops :) More to follow in the next battle over Gliese 581 d
Posted by ArmybitsUK at 08:56