Its almost....safe to say that I am coming to an end of the kickstarter project...... I still have some rewards to be posted and pro painted, however now that Salute is out of the way my casting service can fully put his efforts into casting the remaining figures, whereby I will immediately get the items out into the post! Once this is compeleted I will give the go ahead for the Brits to be available on the blackhat online shop :) So for those that missed  it...... hint hint :)

Its safe to say I was not entirely pleased with the kickstarter outcome, I have had fantastic support and feel I have let them down in shipping the rewards. I know it is out of my hands , however I'm still annoyed with the slipped shipping dates
I'm less annoyed about the costs, however it has given me a reminder that I need to recover my costs! With this in mind, I am holding off on investing any additional funds, from now on the project will be self funded! That is, any costs I recover from sales, will go into creating the new lines as opposed to me running before I can walk without any viable plan!

So the easiest way I can recover costs is to increase the items people can buy without spending this on new sculpts! So Ive come up with a cunning plan (as I mentioned)! This is rather simple in fact, where I will use the current Brits as dollies. This simply means I will remove webbing, helmets, weapons from the original greens and then do them again.

So with all this in mind Ive two 'factions' on the go.  The first is a very simple conversion of the Brits to create the Scots guards battalions. These will be troopers with Glengarry hats and more noticeably, some will be kitted in kilts. One that can deflect a round or two :)

Running alongside this will be a series of other factions, so the second one will be 'German Heer' inspired. A sort of EuroForce if you will. Ive began working on a sketch or two, so Id thought Id show one of them. 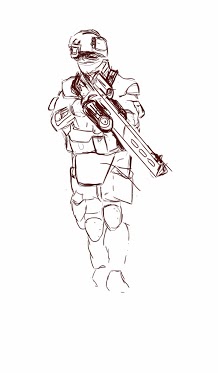 As you can see they are very much a first draft and I will work on better sketches. They are again very modern/future war with a harder sci fi edge weapon. They will have their own look, which the helmets, armour/webbing and weapons will highlight, I hope!


The final part of the cunning plan...... (once I have enough in the pot), is that Ill be then working on the PLA or Asian Pact inspired forces I have already shown. I do not believe I have the skill to do these myself, so Ill be after a pro, hence the greater costs. Its unlikely Ill be using kickstarter as to be honest, the hidden costs and difficultly in full costings means I will end up losing money and that isn't allowed by the wife :)


Anyhow, let me know what you think on the draft and Ill continue to add more sketches and even greens as I do them. I'm always interested to know what forces people would like to! I am thinking Indian and Brazilian are towards the top from a personal level and Ill be thinking about their look as I go along. So any ideas are again welcome!