The figures are available at Black Hat Miniatures  today :)

Ill be posting a little more on all the usual news methods :) 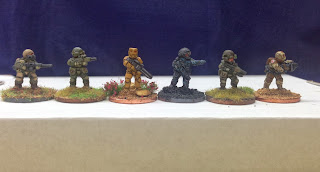 An assortment of my collection.

The Rusk and Commonwealth are released
and the SINO/PLA and  'Enemy Unknown' are coming very very soon!

All topped off with a couple of vehicles over the next month :) I am literally awaiting my stock to grow before I release them. If you do fancy one, let me know so I can make sure I have enough ready:) Ill post up another post about this soon 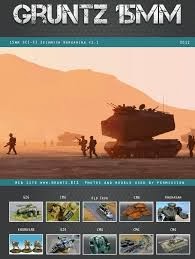 136   pages, A4, Colour and illustrations throughout:

Miniatures are based individually but must be organised into Squads

GAME LENGTH:
2 hours plus depending upon number of figures and type of scenario

All fairly obvious, the higher the better the more expensive they are

The best way to describe  Gruntz is a platoon level game with extra stuff!, however I’m sure you could play bigger and a lot smaller games. In fact I’ve played quite a few small games with only 20 figures each and it plays very nicely and quickly indeed.

I’ve not done a rules review before (it will tell), so I thought I’d start by explaining the book itself a little.
The book contains an introduction, a set of core rules, scenarios, unit builders, additional rules and a lovely bit of background. I have to say I love bumph and this is particularly good and well written!  I can see myself building up some of my forces using the gruntz world.

In fact every section is well written, nicely laid out and has several examples explain pretty much each rule. You also get a nice flow chart for the section (a great idea). This really helps you pick up the game quickly, however like all gamers I did miss a few bits, well rushed past them. This proved to be a little painful for the first game! I made a large error with auto fire and ranges! A little less rushing and I could of found a rather nice example explain how it should have been done! To support this, Robin runs a great little forum were questions are answered very quickly by a very friendly bunch of supporters.  Another big tick!

Anyhow, back to the review. The rules themselves are fairly simple to get along with. Your troops are built into units and generally every unit can have two actions. With an action you can move, double move, shoot, embark, concentrate fire, area fire, over watch, change stance and remove suppression. You can also use perks. Perks give your force some unique benefits/negatives like helping with morale or allowing more effective shooting. All the usual stuff. It does however have some unusual perks, which are clever and well thought out.
Actions are pretty straight forward as is the combat mechanism.

To shoot your unit must achieve the guard level by using 2d6 and your skill. If you hit, you check the soak level and if you have a higher weapons damage +2D6 you cause a wound. One would normally mean 1 dead or if you are a vehicle it means damage, critical damage or it can mean ba ba boom to your vehicle. AP and HP are included. All of stats are marked on some very nice cards, which all your units have. This can be quickly created using the nifty Barracks utility which I think is around $5! Otherwise you can create them yourself, it literally takes minutes and to be honest, its one of the things I really enjoy about the game. The book has masses of information about all kinds of units. Infantry, tanks, APC’s, Walkers, Super Heavy tanks etc etc.

Anyhow the shooting is per person, so using different coloured dice, makes this quicker. Different weapons, like HMG, Sniper or squad support weapons have + and –‘s
Armed combat is similar and quite deadly I discovered with troops testing their metal in the charge and taking incoming rounds. I’m hoping to set up an alien type game in the near future to test this out properly. Hordes of aliens versus a recon squad! Bloody it will be :)

The usual suppression, deaths etc. take the toll on the troops and different conditions of the troops can you leave you in a not so nice place!

Rules for Artillery, fighting in buildings all have similar nice and simple mechanics which allow for a quick game. I think the emphasis is on quick and dirty and I like that! To make a sci fi feel even more sci fi, the game includes rules around the neural net. This is a cyber-battle after all. The neural net can be included in setting up your forces and you can provide offensive and defensive capabilities, which can reduce movement, command and firing amongst other things.

Additional rules include alternative activation, A card driven system ( I like these as the add an element of the unexpected) , group basing rules and a host of other stuff. In fact the core rules allow you to add any house rule you like for your own specific background.

So…..that is about it for now. I’ve probably missed masses, however the more I play the more Ill no doubt wish to add to this review. As it is, I really do recommend these rules and I’ll be certainly putting a lot more time into it. The rules are set around 2200 or so, which Is a little out of my own forces background, however I will be taking a proper look and tweaking some of the rules for my own use and background. I probably don’t need to, however I always like to dabble and see what of my figures I can fit in.

Right ramble over! I’ve jumped about a bit. However that’s what I do! I hope at least one person finds this useful and I’m very happy to answer any questions any of you may have.

A big thumbs up! A quick and nice game mechanic with a lot of depth. You can use it or not :) The book is excellent value and lots of nice pics to inspire me  to get back to the paint or sculpt table! 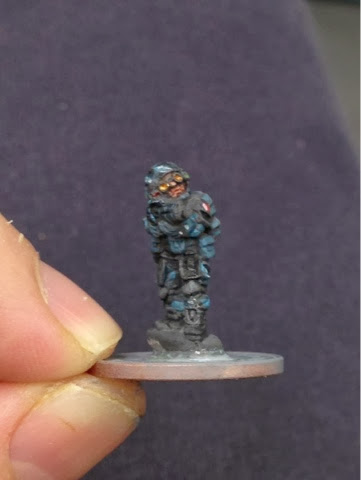 .
Thought I'd give a quick paint job to some samples I have of the PLA forces 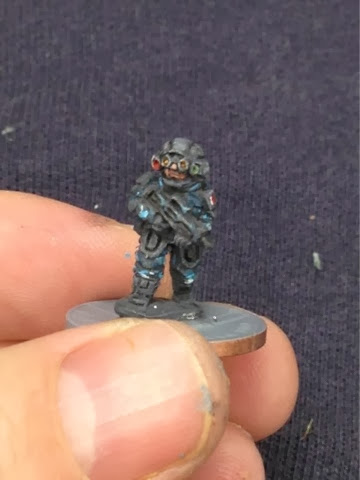 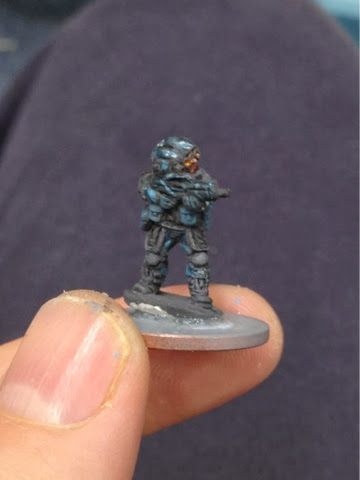 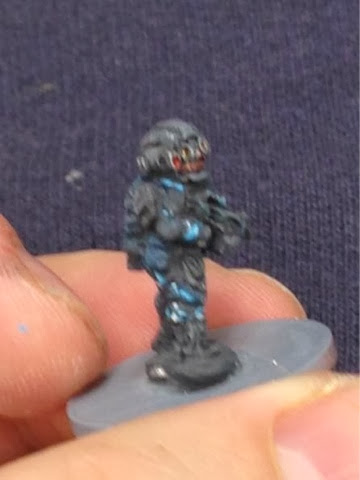 Are those PLA/Sino forces I see.... 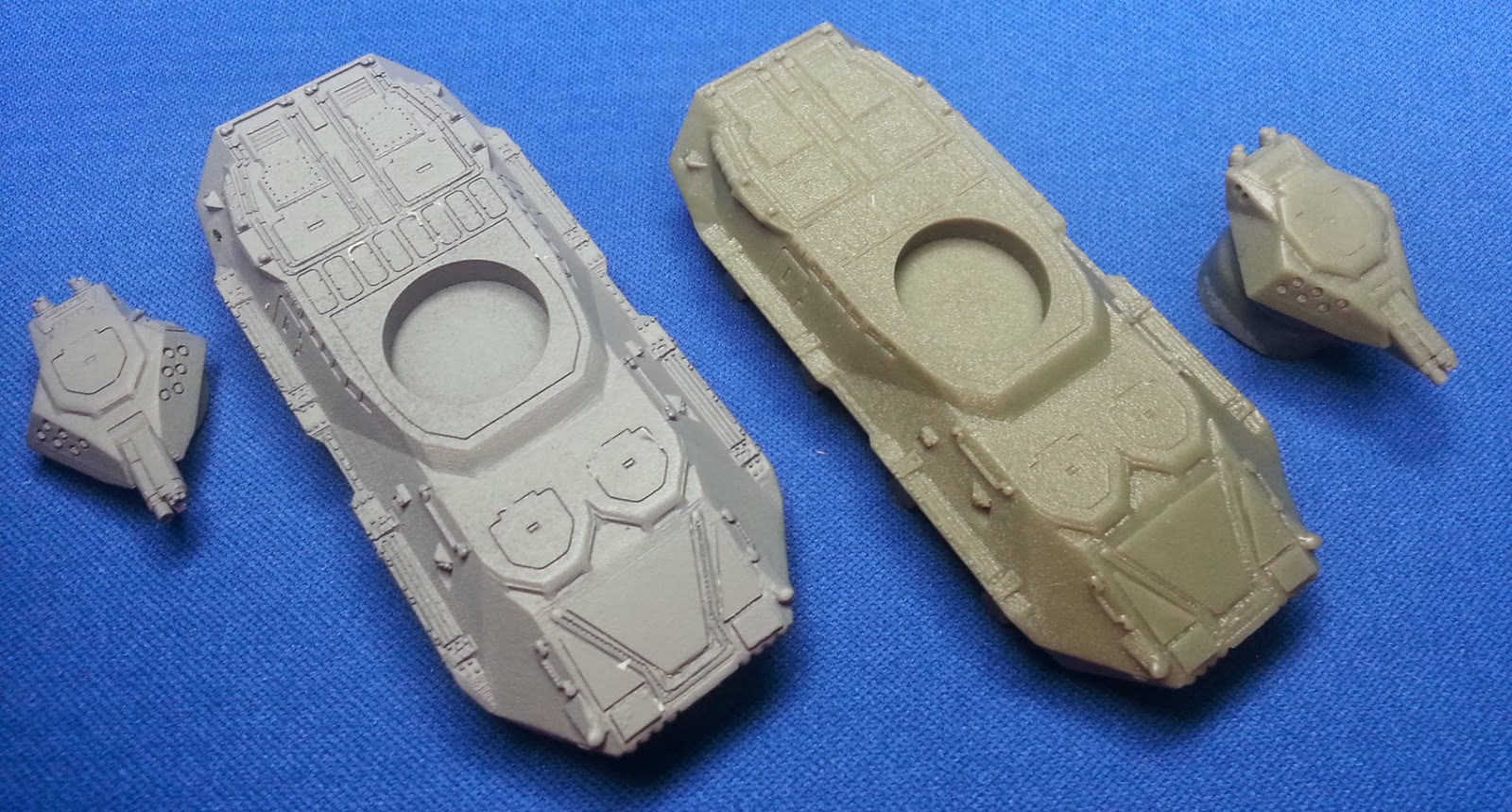 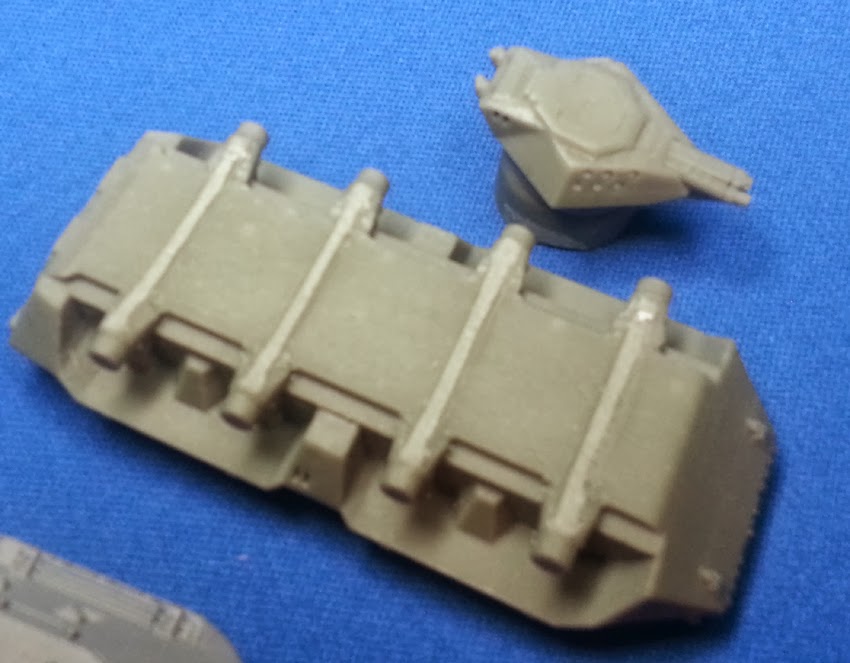 The resin casting has started and here is a pic of the very first one! Im very pleased with them. The wheels are being cast this week in metal and I should have around 20 of them over the next two weeks. Still not sure If I will do a preorder for people or just leave it to first come first serve. The pre order will help me gauge sales to begin with so Ill likely come up with something like that.

I hope to have one in hand soon and one will be going straight to dwartist who has kindly offered to paint one!