This was an early Christmas present today from my rather splendid 3d sculptor Andrew Burton. I knew he was working on it, however after pulling a (very) late one as he was in the zone, he came up with the current Main Battle tank of the RUSK armed forces.

I bring to you the Владимир Владимирович Путин1 - code name VPP1.

Rather then base it on the T-72 series of tanks Andrew went down the IS family of tanks and I am rather pleased that he did! 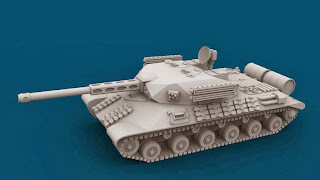 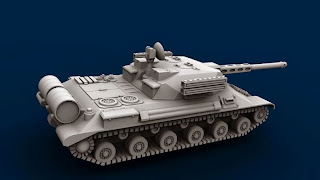 It needs a couple of mounted HMGS (Ive a nice Dhsk) Im going to mount and point defense weapon,  however the thickness of the armor alone can stop most of its rivals guns!
As with the nature of Andrews modular work, this can also be combined with the BTR trailers and a possible flame tank option is on the cards. (I just thought of that:) )
Another option is to have Wing mounted 40mm Cannon as opposed to the Rockets.

Keith
Posted by ArmybitsUK at 12:57