So I finally made it to my club for  a game of Tomorrows War. Ive been promising to play it for quite a while, however sicknesses, work and the family have all got in the way of it. Some of it happily! p.s that's just in case wife reads....:)

Anyhow me and a club mate decided to give Tomorrows War a go and I set up the scenario and provided the figures. A first proper outing for my Neo Sov Troopers!!! horaahhh I hear!

Anyhow the scenario went along the lines of a Mining Corporation had found a alien artifact on some far off planet and had called in for some reinforcements. It was a strong merc force made up of ex serviceman, good T2 equipment, however very little bottle for it. They wanted the pay and no trouble.

What they had not realized, a small force of a  Russian Union Stelkovy Company had arrived earlier in the day. They planned a surprise ambush until further forces could arrive. With short notice, the Russian Union could only gather together some local state troops commanded by a senior Intelligence officer whom had deciphered the information. There mission was to hold and cause causalities. These Corp paid dogs had no stomach for a firefight with the might of the Russian Union troops!

So the scene was set and the players took up position on the board. I played the Russian Forces and Alaistair played the Mining Corp Mercs.

Turns 1 - 3
Merc forces advanced in fire teams using overwatch ( A suprise as Alastair had failed to use tactics previously, then again not a suprise Id he had suffered massively for it!) and the Russian forces kept hidden

Turn 4 - A quick scurry across open ground was tooo tempting for a fire unit based on a hill to overlook. The risk was that an overwatch force had them in sight at distance, however I thought Id better get some units on my table! 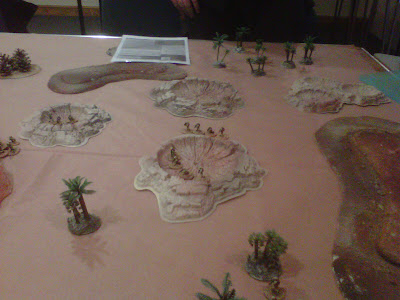 Turn 5 continued with a steady advance of the Mercs and my Russians holding fire, I thought best to get them in close after my last ambush effort! 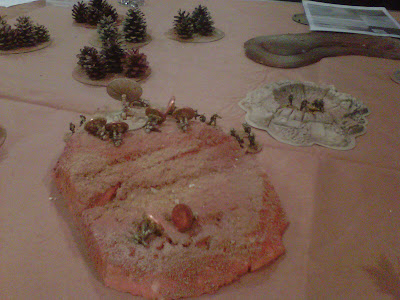 So half my units down and only 2 casualties caused! One of which got up as a medic arrived in the next turn!
Turn 7 -8  saw more advances and a medic help a Merc up again. My downed troops were isolated with no chance of a first aid check at all! (Lesson learnt)
Turn 9 - The Mercs  move slowly towards the artifacts last known location and into a built up mining town. 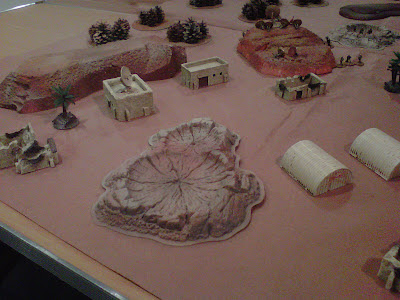 This gave me the opportunity to open fire with my remaining fire teams and HQ section! 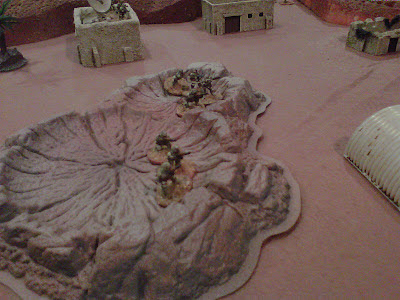 The 2 fire teams holding the crater opened up on the nearest Merc troops causing 2 casualties, however return fire from 2 fire teams wiped out my fire teams! Some good dice rolling from Alastairs special dice. The ones he only ever gets out for those 'special' moments.....for legal purposes, that may or may not be true about the dice... Either way, I was down to my HQ!
Which then promptly went as it tried to shoot up the Merc forces rifling through my injured comrades from the previous ambush...sigh 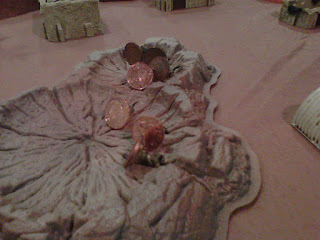 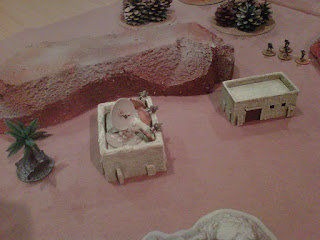 Despite all that and the fact it was over in an hour, it was a very fun game and first outing. I serioulsy over balanced the forces and really should of had random reinforcments  enter  the game, or at least had equal quality of dice! It really shows how much more effective D10 against D8 is and more importantly the good use of tactics and fireteams, Which I hate to say Alastair used exceptionally well!
So next time - more balance and maybe some arty or vehicles. I will certainly be adding any advantages to my own troops! They bloody better win, Im still trying to pay for them!!!
Posted by ArmybitsUK at 06:15